June 8: Blessed Pentecost and Happy Birthday to the Church!

Almighty God, on this day you opened the way of eternal life to every race and nation by the promised gift of your Holy Spirit: Shed abroad this gift throughout the world by the preaching of the Gospel, that it may reach to the ends of the earth; through Jesus Christ our Lord, who lives and reigns with you, in the unity of the Holy Spirit, one God, for ever and ever. Amen.

Watch this film. Come join in the conversation!

Q&A and a special Pride Taizé service follows the film.

For additional details or directions visit www.incarnationsf.org. You can also register for the event on our facebook page www.facebook.com/incarnationsf or http://www.eventbrite.com/e/in-gods-house-a-film-about-lgbt-asian-american-christians-in-the-church-tickets-11437214015

To learn more about the film visit www.ingodshouse.com. The film was featured in the 2007 Frameline San Francisco International LGBT Film Festival. 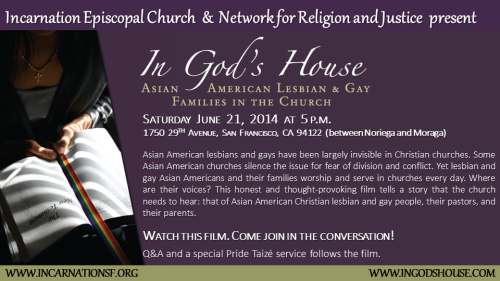 Alleluia! Christ is Risen. The Lord is risen indeed. Alleluia!

Building a Fence around the Torah

Homily for the Sixth Sunday after the Epiphany, Year A

Since last Sunday, we have been hearing excerpts from Jesus’ Sermon on the Mount. Last week, we heard Jesus say, “… not one letter, not one stroke of a letter, will pass from the law until all is accomplished.” Today, we hear what biblical scholars have named “The Antitheses.” (To be more precise, we hear four of the six antitheses; the other two will be heard next week.) Now, an “antithesis” is a rhetorical contrast of opposites. And the presumption has often been that Jesus is opposing his new laws against the old Jewish laws. But considering what Jesus said about not abolishing even one stroke of one letter of the Law, it seems unlikely to me that “The Antitheses” are, in fact, antitheses!

With that in mind, let’s go through each of the four so-called “Antitheses” and try to figure out what Jesus was asking of his disciples then and what he is asking of us today.