Happy new year! In the U.S. civil calendar, the new year starts on January 1. In the Chinese lunar calendar, the new year usually falls on the second new moon after the winter solstice. But the church’s new year starts on the first Sunday of Advent, which just happens to be today. The basic meaning of the English word advent is “coming.” In Christian terms, it refers more specifically to the Two Comings of the Messiah. The first is the coming of the Messiah some 2000 years ago in the person of Jesus of Nazareth. The second is the anticipated coming of the Messiah on the Day of Judgment. And in one way or another, all of today’s readings deal with the Coming of the Lord.

END_OF_DOCUMENT_TOKEN_TO_BE_REPLACED 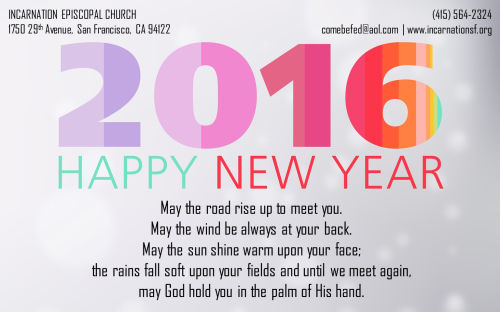 May the road rise up to meet you.
May the wind be always at your back.
May the sun shine warm upon your face;
the rains fall soft upon your fields and until we meet again,
may God hold you in the palm of His hand.

Sermon preached at the Church of the Incarnation on September 7, 2014, by Christopher L. Webber.

My parents liked to tell a story about my younger brother who finished kindergarten successfully and had a leisurely summer and then began to hear references to a new school year and asked: “You mean I have to go again?”

Well, here we are again at that time of year and you have to wonder whether the committee that planned the readings for today was thinking about the new school year when they chose that passage from Exodus.

This still is the “beginning of months” – and not just for school kids and teachers. We’re less than three weeks from Rosh Hashanah, the Jewish New Year. We are one week into the Eastern Orthodox Liturgical new year. We’re less than two weeks away from celebrating the hundredth anniversary of this parish and beginning the new parish year, the one hundred and first parish new year.

But how many New Year’s Days can you think of? January is the official one at the moment, but Chinese New Year comes on February 19 next year and March was the European New Year until a few centuries ago. July begins the new financial year. November brings Advent and the beginning of the Church Year. And that’s just off the top of my head – which means that if you want to celebrate a New Year you never have to wait long to do it. Which means that if you want a chance to start over, it’s always theoretically available.

And I think we need new years, new starts. I think it’s a very human impulse. We make a mess of things and we want the chance to start over. I’ve gotten really tired in recent years of hearing interviews with athletes who say, “I’ve just got to put it behind me.” Some of them have pretty much used up the space behind them. Politicians too. Wouldn’t Washington like a chance to start over in Afghanistan and Iraq? You look back and you see a trail of devastation, broken relationships, broken lives, things no human power can set right, and you can’t just start over as if it hadn’t happened. The money you spent on weapons is gone. The lives sacrificed are gone. You can’t bring them back. There’s a terrible finality to our actions and no way to reverse time. It’s no wonder the concept of a new year, a new beginning has such appeal.