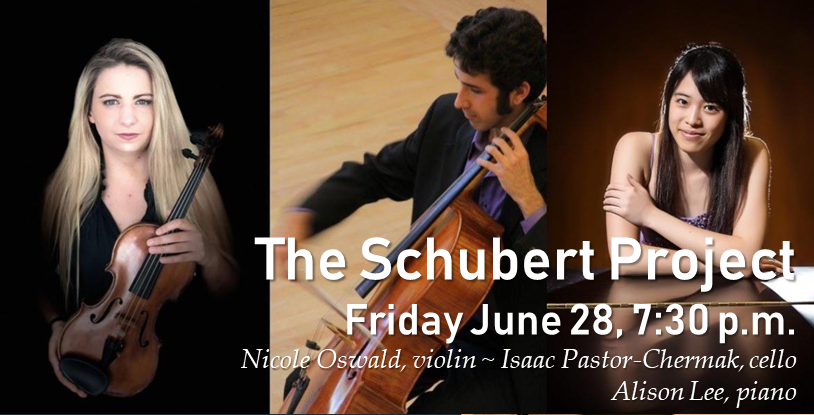 Celebrate pride and the genius of Franz Schubert (1797-1828) in an all-Schubert program for violin, cello, and piano.

Franz Peter Schubert (31 January 1797 – 19 November 1828) was an Austrian composer of the late Classical and early Romantic eras. Despite his short lifetime, Schubert left behind a vast oeuvre, including more than 600 secular vocal works (mainly Lieder), seven complete symphonies, sacred music, operas, incidental music and a large body of piano and chamber music. Appreciation of Schubert’s music while he was alive was limited to a relatively small circle of admirers in Vienna, but interest in his work increased significantly in the decades following his death. Felix Mendelssohn, Robert Schumann, Franz Liszt, Johannes Brahms and other 19th-century composers discovered and championed his works. Today, Schubert is ranked among the greatest composers of the 19th century, and his music continues to be popular.

Ensemble 1828 — violinist Nicole Oswald, cellist Isaac Pastor-Chermak, and pianist Alison Lee — makes their debut with an eight-concert tour throughout Northern California in Summer 2019. Honoring Schubert’s last and most productive year with their name, Ensemble 1828 will present an all-Schubert program, highlighting music composed in their namesake year and featuring varied groupings of violin, cello and piano. Come for the timeless solo piano impromptus, stay for the intimate duos for cello and piano and violin and piano, and come back after intermission for the epic, symphonic Piano Trio No.1.

Nicole Oswald recently received an Artist Diploma from the Frost School of Music at the University of Miami, studying under renowned concert violinist and pedagogue Charles Castleman as a graduate teaching assistant and Henry Mancini Institute fellow.  Prior to attending Frost, Nicole studied violin at the Utrechts Conservatory, Netherlands and the Eastman School of Music. Nicole began her studies of music in her hometown of Boise, Idaho. She has accumulated many honors in the Northwest including; 1st prize at the Coeur d’Alene National Young Artists Competition 2012 and 3rd prize at the national level of the Music Teacher’s National Association: Senior String Division competition held in NYC, 2012. Her string quartet also received 1st prize in the Boise Chamber Music Series: String Quartet Competition in 2012 and 2013. Alongside performing within numerous symphony orchestras, Nicole has performed contemporary music in many ensembles including, Ossia New Music, the Empire Film Music Ensemble, and the Slee Sinfonietta (University of Buffalo, NY). Nicole has been a guest artist at the Castleman Quartet Program and has studied chamber music with members of the; Pacifica, Fine Arts, Ying, Dover, Cavani, Concord, Juilliard, Bergonzi and Chilingirian String Quartets. She has appeared in solo master classes with; Rachel Barton Pine, Christian Tetzlaff, Mimi Zweig, Giora Schmidt, Csaba Erdélyi, Irvine Arditti, and Vadim Repin. While in Miami, Nicole was a chamber music coach for Miami Youth for Chamber Music, appeared as a guest performer with the Bergonzi String Quartet and played in the Palm Beach Opera Orchestra. In fall of 2018, Nicole will continue her studies as the teaching assistant of Andres Cardenes at Carnegie Mellon University.

Alison Lee recently completed the Doctor of Musical Arts in piano performance at the University of Minnesota, where she studied with Lydia Artymiw. She received her MM degree from Rice University under Jon Kimura Parker, and BM degree from Oberlin Conservatory under Angela Cheng.  A native of Fremont, California, Alison studied with Hans Boepple and Jed Galant during her precollege years.

Alison was the first prize winner in several piano competitions, including Thursday Musical’s Young Artist Scholarship Competition in Minnesota, the Pacific Musical Society Competition in San Francisco, the Dorothy Van Waynen Piano Competition in Berkeley, and the Graves Music Competition in Ohio. Most recently, she won second place in the 2016 Midwest International Piano Competition, where she performed Beethoven’s Emperor Concerto with the Waterloo-Cedar Falls Symphony. An avid chamber musician, she frequently collaborates with colleagues and friends as well as with her sister Katherine as duo pianists.

In Summer 2018, following nine years of world-class education around the United States, Alison returns to the Bay Area to launch her career as an educator, collaborator, and soloist. She is already in high demand as a studio piano teacher, and looks forward to a number of performance engagements throughout the Western United States in the 2018-19 season. In July 2018, Alison will coach chamber music at ChamberFest LIVE, a summer day camp for middle- and high-school students in Fremont, CA; and in August 2018, she will appear as staff pianist at the Castleman Quintet Program in Portland, OR.

Isaac Pastor-Chermak is Principal Cellist of Portland Opera and Waterloo-Cedar Falls Symphony; Associate Principal Cellist of Stockton Symphony; and a member of Santa Barbara Symphony, Monterey Symphony, Santa Cruz Symphony, and Dayton Philharmonic. Beginning August 2018, he will conclude his summers performing at the Lake Tahoe Music Festival. Mr. Pastor-Chermak is the cellist of Black Cedar Trio, the only professional flute-cello-guitar ensemble in the country, and enjoys frequent sonata collaborations with pianists Miles Graber and Alison Lee.

Mr. Pastor-Chermak is in constant demand as a soloist and recital artist, performing more than 100 concerts every season on an 1889 Riccardo Antoniazzi cello. In the first half of 2018 alone, he will perform a major duo recital with pianist Alison Lee, featuring works of Gershwin, Chopin, Beethoven and Prokofiev; C.P.E. Bach’s Cello Concerto in A minor with Waterloo-Cedar Falls Symphony; Eugen d’Albert’s Cello Concerto in C major with Oakland Civic Orchestra; Leonard Bernstein’s Meditation No.3, also with Waterloo-Cedar Falls Symphony; two performances of the complete Bach Suites for Solo Cello; and a live-recorded concert with Black Cedar Trio. Mr. Pastor-Chermak fits these creative projects around weekly symphonic programs throughout the country, as well as his local teaching and conducting obligations.

As an educator, Mr. Pastor-Chermak is Beelard Foundation Artist-in-Residence at Young Artists Conservatory of Music in Vacaville, CA; and a faculty member at Dominican Sisters School of Music in Fremont, CA. His cello students and chamber ensembles receive consistent high marks in regional competitions. He is founder and principal conductor of Solano Youth Chamber Orchestra, the first youth orchestra in the city of Vacaville. Pastor-Chermak serves on the Board of Directors of the East Bay Music Foundation, where he supports outreach and performance opportunities for young musicians in Alameda, Contra Costa and Solano counties. Pastor-Chermak holds degrees from the University of California, Berkeley (B.A. with honors) and San Francisco Conservatory of Music (M.M. with honors). He makes his home in the North Berkeley hills, but is at home wherever the music takes him. www.isaacpastorchermak.com.