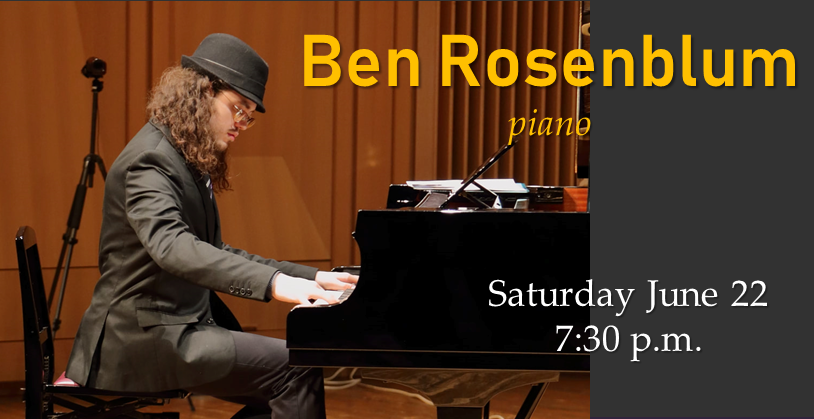 Award-winning jazz pianist, composer and accordionist Ben Rosenblum has been described as “mature beyond his years,” (Jon Neudorf, Sea of Tranquility), and as an “impressive talent” (C. Michael Bailey, All About Jazz), who “caresses [the music] with the reverence it merits” (Bob Doerschuk, Downbeat Magazine). Ben is based primarily in New York City, and is a graduate of the Columbia-Juilliard program (in 2016). His original music combines his extensive knowledge of the history of jazz with a free-wheeling, modern melodic sensibility and powerful narrative approach to the piano. His profound passion for jazz, swing and world music genres finds expression in his unique fusion of harmonic and rhythmic elements from a wide array of sources, and gives rise to a signature compositional sound and style at once iconoclastic and deeply rooted in such figures as Bill Evans and Wynton Kelly. Ben’s first priority in his composition and in his playing is always narrative – to tell a compelling story with his music, while reaching the hearts of his audience, connecting on an emotional, an intellectual and a spiritual level.

Reviewers of his debut album Instead – released in 2017 with bassist Curtis Lundy and drummer Billy Hart – have been impressed by his musicality and his tasteful playing in light of his immense technical skill. Bob Doerschuk of Downbeat Magazine gave the album four stars, and wrote, “He has the chops to shoot off a few fireworks, … but that doesn’t seem to be a priority when covering sacred material.” C. Michael Bailey notes approvingly: “there do emerge conservatoire aces with grit in their imagination and a facility to express such in their playing. Ben Rosenblum is one such performer/composer. The Julliard-Columbia trained pianist brings a freighter of technique to the keyboard, while still maintaining enough earthiness in his playing to satisfy even the fussiest listener.” Fred Stal of RG Magazine most recently described his experience of listening to Ben’s live CD release performance: “The music keeps you on your feet and not wanting to miss a single moment of magic. … Raindrops from heaven poured down with style and grace from Rosenblum’s piano.”

Since the release of Ben’s debut album, Ben has been touring regularly – both nationally and internationally – celebrating the album and collaborating with artists around the world. Ben’s trio made debuts in Japan and in Canada in 2018. During his two-week tour of Japan, Ben performed in eight different cities, including in Tokyo at Akasaka B-flat, and in Yokohama at Himawari-no-sato Concert Hall with famed koto player Yuko Watanabe. Highlights of his Canada tour included appearances at Upstairs Jazz in Montreal, Maelstrom and Bar Ste-Angele in Quebec City and the Southminster “Doors Open For Music” Concert Series in Ottawa. In the United States, Ben has traveled extensively throughout the Northeast, Midwest and West Coast, with trips planned for the South and Southwest. These domestic tours have featured performances at some of the most well-respected venues in the country, including Kuumbwa Jazz Center (Santa Cruz), Ravinia (Chicago), Cliff Bells (Detroit), An Die Musik (Baltimore), The Bop Stop (Cleveland), Mezzrow (New York City) and many others. As a sideman, Ben has had further opportunities to tour the world. In 2018, he traveled for three weeks through Croatia, Slovenia, Italy and Serbia with Astrid Kuljanic, during which the group performed at multiple festivals, including the Ljeto na Bundeka Festival in Zagreb and the Soboško Poletje Festival in Murska Sobota. He also performed for two nights at the Blue Note in Beijing alongside famed jazz singer Deborah Davis.

Born and raised in New York City, Ben had the opportunity to study with some of the most influential figures in jazz piano, including Frank Kimbrough, Bruce Barth, Ben Waltzer and Roy Assaf. At the early age of sixteen, the originality of his work was already being recognized with numerous awards, including the ASCAP Young Jazz Composers Award (2010), the Downbeat Student Music Award for Best Original Song (2010) and the Downbeat Student Music Award for Best Arrangement (2011). As a result, even before entering Columbia, Ben was commissioned by the XIBUS World Orchestra to write a piece for performance at New England Conservatory’s Jordan Hall in 2012. Ben has continued to earn numerous distinctions and honors in recent years. In 2015, he was a finalist at the American Jazz Pianist Competition in Melbourne, Florida, and in 2016, at the Jacksonville Jazz Piano Competition in Jacksonville, Florida. In 2018, he earned further recognition from the ASCAP Young Jazz Composers Award competition in the form of an honorable mention, and he was featured at the ASCAP Foundation’s 2018 “We Write The Songs” event at the Library of Congress in Washington D.C.

In addition to his own work, Ben often collaborates with other musicians. He has worked extensively with Grammy-nominated singer Ryland Angel on several compositional projects, including the project Unspoken, which premiered at the Weisman Art Museum in Minneapolis, in November of 2016. His debut album Instead has received very favorable reviews from a wide range of sources throughout the world, including Downbeat Magazine, All About Jazz, Drumset Magazine (Italy) and The Jazz Writer (Germany).

Ben performed with the Bachiana Brasileira Orchestra at Lincoln Center (conducted by Joao Carlos Martins and featuring Dave Brubeck), and he was a featured soloist at Carnegie Hall’s Stern Auditorium with the New York Harmonic Band (conducted by Reona Ito). He traveled to New Delhi, India, to perform at a Max India Benefit, and was a participant at Il Grande Veggio, in Perugia, Italy. He has played at the Masten Jazz Festival (Buffalo), the Richmond Jazz Festival (Richmond), the Mid-Atlantic Jazz Festival (Maryland), Lincoln Center Out of Doors Festival (Manhattan), the DUMBO Arts Festival (Brooklyn), Musikfest (Bethlehem, PA) and the Music Mountain Festival (Connecticut). He has also appeared at Dizzy’s Club Coca-Cola, the Appel Room at Lincoln Center, Ryles Jazz Club, Webster Hall, Symphony Space, The Blue Note, Smoke, Smalls and a host of other music venues throughout the northeast.

While at Columbia University, Ben founded the Columbia Jazz House, a student-run jazz advocacy group that promotes jazz on campus through concerts, educational workshops and jam sessions. On December 28th, 2015, the Columbia Jazz House was featured in a New York Times article titled “Melodies Night and Day in this Columbia Dorm.”

Greg Feingold started playing bass at the age of 10. He quickly realized that bass was something he would pursue for the rest of his life and was accepted to the Chicago Academy for the Arts. After graduating from the Academy, Greg was given a scholarship to attend Berklee College of Music. Greg was very active both locally and nationally while at Berklee. He began playing with the International String Trio and performing regularly with Berklee faculty such as Bill Pierce, Neal Smith, Jon Hazilla, Doug Johnson, Rebecca Cline and many others. After graduating, Greg moved to New York and began playing in Winard Harper’s Jelli Posse. Throughout his stay in New York, he worked with legendary jazz performers such as Jimmy Cobb, Eric Reed, Eric Harland, Cyrus Chestnut, Steve Turre, Jim Rotondi, Jackie Ryan, Stephen Scott as well as continuing to tour with the International String Trio and the Valinor Quartet. Greg moved to Seattle in 2015 to change his surroundings and currently performs with a variety of groups around the west coast. He can be seen performing regularly with Thomas Marriott, Julian MacDonough, Miles Black and other great local Seattle musicians. He also co-leads the 200 Trio which performs around the country as one of the up and coming jazz guitar trios.

Jazz drummer and educator, Ben Zweig, “is able to combine history with the current musical environment, making it sound fresh” (Don Sickler). After moving to NYC in 2011, the 26 year old has accompanied an impressive array of jazz luminaries, including; Randy Weston, Johnny O’Neal, Larry Ridley, David Williams, Roy Hargrove, Deborah Davis, Joe Cohn, Champian Fulton, Jerry Dodgion, and Steve Nelson. Described by downbeat as “especially crisp and articulate,” Zweig has presented his personal sound performed with tours throughout the continental US, Asia and Canada. He currently tours regularly with Ben Rosenblum’s trio and leads a bi-weekly residency hosting the Sunday late night jam sessions at Smalls Jazz Club in NYC. Zweig is an avid educator. He has taught clinics across the country with the Champian Fulton quartet and has also directed the after-school percussion program at WHEELS middle and high school. Mentored by master drummers such as Joe Farnsworth, Billy Hart, Kenny Washington, Rodney Green, Justin DiCioccio, Christopher Brown, John Riley, and Rogerio Boccato, Ben is committed to passing down the information he has received from these legends. In his formative education, Ben was classically trained by Kenneth Piascik, culminating in performances with the NAfME All-Eastern Orchestra and as principal percussionist with the MENC All-National Concert Band. He currently maintains a private drum studio in Morningside-Heights with students of all ages. Ben received his B.M. and a M.M. from the Manhattan School of Music.