No, You Do Not Have to Hit Back!

The Gospel reading today is from the Sermon on the Mount. Last week, we heard the first four of the six so-called “Antitheses.” Today, we hear the last two. As you may recall, the Antitheses are not really antitheses. Jesus is not replacing the commandments of the Law. Instead, he is protecting them, by building a fence around the Torah, so that his disciples do not even come close to breaking any of its commandments.

Jesus starts out by speaking about the law of retaliation, “an eye for an eye and a tooth for a tooth.” No law has been so misinterpreted by so many for so long! The original purpose was not to require retaliation, but to limit it. In the bad old days before this law, if someone stole a man’s sheep, he might kill the thief. And while he was at it, he might kill the thief’s wife, parents, and baby children—just to get the point across that he is not to be messed with. The extended family of the slaughtered might then decide to declare war on the extended family of the man who killed their kin. And the violence only escalates. The purpose of the law of retaliation was to prevent just such an escalation.

Jesus builds a fence around the Torah’s restriction on retaliation, restricting it much further than “an eye for an eye.” Jesus says, “Do not stand in battle against an evildoer. But if anyone strikes you on the right cheek, turn the other also.” In today’s context, I would not recommend taking this advice literally. You are bound to get hit a second time, and the perpetrator will only feel vindicated. But in Jesus’ day, the context was very different. Jesus specifies that the cheek that is being struck is the right cheek. It turns out that this little detail is critical to understanding what Jesus is saying. Ancient Jewish society was emphatically right-handed; the left hand was reserved for toilet matters. So in order for someone to strike another on the right cheek with his right hand, he would have to be giving a backhanded slap. In ancient Jewish society, this was an act of humiliation given only to a person of lesser station in life, such as a slave or a child or a woman. Those of equal station were slapped with the palm or struck with a fist. By turning the other cheek, the attacker is invited to strike again, but with the palm of his right hand or with his right fist. And while one might get struck again, it forces the attacker to acknowledge his opponent as someone of equal station. So while Jesus forbids physical retaliation, he is not, in fact, advocating passive submission. (As an aside, there is a serious flaw to Jesus’ approach: the attacker just might decide to break with custom and humiliate the disciple even further by giving him a backhanded slap with his toilet hand!)

The bit about giving your outer garment to anyone who would take away your inner garment also has a specific context that gives added dimension to Jesus’ advice. The context is the Jewish courtroom. A poor person is being sued for his inner garment. Jesus recommends surrendering the outer garment as well. The point that isn’t immediately obvious is that Jews in Jesus’ day only wore two garments. So the result of Jesus’ advice is to strip naked in the courtroom. The one surrendering all his clothes does suffer embarrassment, but so does the one suing for another man’s clothing. He is made to look ridiculous, and the extent of his greed is made evident to all.

Jesus then tells his disciples, “If anyone forces you to go one mile, go also the second mile.” The context here is the Roman occupation of Judea. Roman soldiers were allowed to compel the local population to do their bidding and, in particular, to require them to carry their baggage. (Remember how Simon of Cyrene was compelled to carry Jesus’ cross.) Jesus knows that if you simply say no, you may be beaten or even killed. So he advises another, more subtle, form of resistance. When told to carry baggage one mile, carry the baggage two miles. And act as if it were your own choice to assist all along, thereby taking back your dignity. 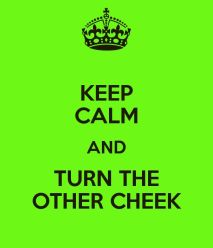 In the advice to turn the other cheek, to surrender all one’s clothing to a creditor, and to go the extra mile, Jesus is neither condoning violent retaliation nor advising abject passivity. Instead, he is opting for a third way—a creative, nonviolent way of teaching one’s oppressor a lesson. In each case, the disciple may suffer further; but in each case, the disciple also strikes a blow, metaphorically speaking, for self-worth and just treatment.

Now, the take-away message is not to slavishly obey these three bits of advice. Jesus’ social context is not our context. The point is to find ways in our day to demonstrate to bullies and oppressors in a nonviolent manner that they don’t get the last word and that they cannot take away our dignity as children of God. And we are asked to do this, not just for our own sake, but in the hope that the unexpected action of the disciple might jar the enemy into self-examination and open the door to transformation. Will it always work? Of course not. But as disciples of Jesus, we must make the effort.

Now, just for kicks, let’s contrast Jesus’ teaching about retaliation with the teaching of President Trump. In 2012, in a speech about how to get ahead in life, he told his audience the following:

No, President Trump, you do not have to hit back! And neither do you have to be a doormat. There is a third way, and that is Jesus’ way.

Up to now, Jesus has been advising his disciples how to act when they have been victims of some wrongdoing, building a fence around the law of retaliation. Now, he inserts a teaching for those disciples who might be tempted to ignore the poor: “Give to one who asks you for something, and do not turn your back on one who wishes to borrow from you.” Now, Jesus does not say that you are required to give a person everything he or she asks for, only that you are to give something, to make some effort, to give some acknowledgement that the person in need is a real person, worthy of one’s consideration.

Finally, Jesus goes on to build a fence around the commandment to love one’s neighbor—as if the original commandment weren’t hard enough! Jesus teaches his disciples: “Love your enemies, and pray for those who persecute you.” Now, as I have said many times before, biblical love refers primarily to actions, not feelings. Jesus is not asking us to like our enemies, but he is asking us to treat them well and even to pray for their well-being.

So American Christians are expected to treat captured Islamic terrorists with justice, fairness, and dignity. Waterboarding and other forms of torture are simply out of the question! Democratic Christians who vehemently oppose the policies of our new President and see him as their enemy are still required to treat him with due respect. Republican Christians who support President Trump’s strong stand on “illegal immigrants” are still required to show mercy to those same “illegal immigrants,” most of whom are not, in fact, the enemies of this nation, but just our poor neighbors. (And it goes without saying that Democratic Christians and Republican Christians, being members of one body in Christ, are expected to love one another, despite any differences over policy—something our whole nation seems to have forgotten.) Admittedly, such love might end up costing us, and hitting back “five times harder” might involve less risk. But love often demands risk; love often demands costly sacrifice. And if we would be disciples of Jesus, we must be willing to pay that cost.

© 2017 by Darren Miner. All rights reserved. Used by permission.

Tagged as anglican, anglican communion, antitheses, building a fence around the Torah, christianity, Episcopal, episcopal church, eye for an eye, love your enemies, retaliation, sermon on the mount, theology, turn the other cheek